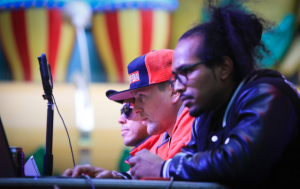 The 18-year-old Californian from the Sacramento area spun his own black-and-orange sign over his head and gave it a flip in the air.

“My brother got me into it,” Scholz said. “I also do some dancing, parkour. I do some juggling.”

Scholz was one of 100 contestants competing Saturday in the 10th annual World Sign Spinning Championships at the Fremont Street Experience.

Contestants came from across the U.S. and from as far away as Seoul, South Korea.

At the end of the day, Jose “Mucho” Angeles of Northern California walked away with first place and $5,000, after he wowed the crowd and judges with acrobatic prowess, twirling and flipping body and sign, and doing it barefoot. Among his other accolades: Spinner Choice Award 2015.

Earlier, contestant Clint Hartman told how he fell into sign spinning. He started 12 years ago when his dad told him to get a job. Now he manages his own team for a Seattle franchise.

Hartman, 27, said he hopes to own a franchise one day. His progress has surprised some, including his father.

“He said it wouldn’t get me anywhere,” Hartman said. “And now look at me. I’m in Vegas.”