How Mr. Glasses guerrilla marketed IT with less than $10,000

Last week saw the lead up to the new horror movie IT, which made a whopping $7.467 million at the box office this weekend.

Experiential agency Mr. Glasses, which opened its Sydney office in April, was given a tight brief from the client: the campaign couldn’t explicitly feature the film’s protagonist, Pennywise the clown.

The agency behind the guerrilla marketing tactics describes the brief as “challenging”.

“We were asked to come up with concepts and ideas on how we can promote the film in Australia and there was obviously a bit of a catch,” Chris Campbell says.

With a budget of less than $10,000, the five-month-old agency accomplished its aims while managing to stick to strict instructions not to directly feature Pennywise the clown anywhere in its advertising approach.

“[It] was challenging of course, but we didn’t have a massive budget to work with so we put our thinking caps on and started thinking about what was really iconic in the film,” Campbell tells Mumbrella.

“The balloons are very accessible and it’s also very iconic, it is something that allows people to automatically put two and two together.

“Once we knew the limitations of the brief we started looking at their full aspects of the film and the balloon was definitely one we gravitated to.” 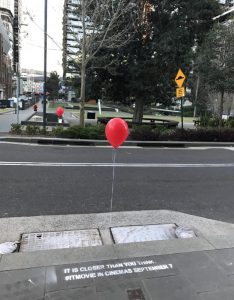 The movie follows a gang of local kids who begin disappearing one by one, leaving bodily remains behind.

During the movie, the kids are united by their strange encounters with an evil clown and red balloons.

Campbell says while the agency had the idea about the balloons before receiving the brief, other marketing ideas were explored.

“The balloons tied to the drain was just really a no-brainer, once we knew we wanted to use the balloons it was like ‘What else can we do with them? Where can we put them?’

The agency had a couple of other ideas with the balloons, including attaching balloons to drones and flying them around a food court.

“You would be able to control the balloon while everyone is eating so it flies around above their heads,” he says.

In a separate part of the campaign, the experiential agency also used six different street artists to paint murals based on their loose interpretations of Pennywise the clown.

Melbourne, Brisbane and Sydney each had two murals.

For street advertising to work, according to Campbell, it must be both shareable and emotional: “You want people to have an emotional feel because once you have that emotional connection then the marketing has worked and people will remember it.

“There is a lot of scope for doing stuff in the street, it is all about getting people to engage in something, and once they engage in it then they have some ownership in it.”

The balloons were the agency’s biggest and only expense for the campaign, costing less than $10,000.

Offering advice to other agencies and brands working to small budgets, Campbell jokes: “Give me a call”.

Answering more seriously, he says other people’s opinions will be key.

“Speak to people from different backgrounds, we have a little bit of a focus group and no ideas are bad ideas and then you can go away and marinate those ideas and come back with something better.

“It is just about creating that focus group and letting the ideas be the champion.”

Campbell says the response has been “99% positive” because no one else thought of the idea and the campaign had a clean-up policy.

There were no official policies and procedures the agency had to follow in regards to the clean up, but Campbell says the agency gave itself “a mandate to ensure [it] did things correctly”.

“We spoke with an environmentalist to make sure the balloons were recovered a couple of hours after they were placed and all the string as well.

“We then recycled them afterwards so there was no backlash,” Campbell notes.

“We didn’t just go and tie them to drains. [Mr Glasses and Village Roadshow] made sure there was a protocol of a clean-up policy and then a reporting policy to make sure we reported back to the client everything that we did.”

On the overall success of the campaign, Campbell says it was a team effort.

“I can’t take all the credit, Village Roadshow deserves a huge congratulations and we wish more clients were like them I want to personally tip my hat to Stacie Beckma and Maria Kaladze. These women had a vision and trusted us with IT.”