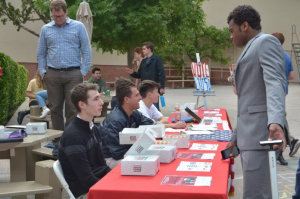 Members of the Unconventional Leadership class promoted the May 16 Los Angeles Unified School District elections with a booth on the quad that featured a sign-spinner, Krispy Kreme doughnuts and music on Monday. Nick Melvoin ’04 and Steven Zimmer ran for the position of Member of the Board of Education in Board District 4 of the LAUSD.

Students used a megaphone and chalk messages to attract their classmates to the booth, where they could register to vote and sign up to travel to a voting center on school buses Tuesday. Though participants have to be at least 18 years old to vote, organizers encouraged students to register their parents as well.

“Something like this, just raising awareness for the issues in our own community, is important because students in these schools are people that we are going to be growing up with,” co-organizer Wilder Short ’18, who attended magnet LAUSD schools for nine years, said. “In terms of our society and even if we may never really know them, they have a direct impact on our life.”

To garner support, members of the leadership class offered individual and school-wide rewards. According to Short, if a student persuades two people to vote, that person will receive a free Sprinkles cupcake next week. For every combined 50 votes, a teacher will be pied during the next school assembly. And if participants get more than 500 votes, organizers will bring a free food truck onto campus. Students can send selfies or notify class members that they voted by emailing them at hwvotes@gmail.com.

“I think it’s really good for a young high school student like myself to get involved in something that could have such a major change, especially in the LA school system,” co-organizer Davis Ford ’18 said. “Because even though I’m not directly affected by it, I have a ton of friends who are and I think it’d be really good if we could get this school system on board.”