AArrow isn’t just a job but a family as well

You are here:
AArrow NewsLatest NewsNews

Just three years ago, Joshua Clark was alone in his hometown of Flint, Mich., looking for both employment and a home. The then-24-year-old, a couple of years removed from his college career at nearby Saginaw State University, decided to leave the cold to move in with relatives and seek opportunity in Las Vegas.

Now, as a manager with AArrow Sign Spinners, Clark is helping host the country’s largest sign-spinning competition for its 10th straight year in Las Vegas. 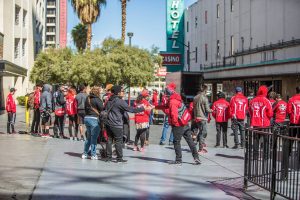 “The spinning community is like a family,” said Clark, now 27. “I’ve found a home here. This is a job to us, but we grow as people, too.”

Over 120 competitors from six countries are expected to attend the free, open-to-the-public weekend event, which starts today and concludes Saturday in front of Four Queens on the downtown Fremont Street Experience’s middle stage. The competition, which gives each participant 30 seconds to perform as many tricks as possible while spinning a seven-pound, 6-by-2-foot arrow-shaped sign, is judged by a panel of fellow performers and bases its results on crowd noise and technical factors.

Las Vegas resident Rayen Jones took his first job spinning signs outside businesses like H & R Block, Little Caesars and local car dealerships, as a 14-year-old in 2005. Twelve years later, he has learned over 500 tricks. Now 26 and the general manager of AArrow Las Vegas, Jones said sign spinning remains the only job he has ever had, and the only job he wants.

“I love to make people smile, man,” Jones said. “It’s like many careers in that whatever you give out you get back.”

San Diego-based AArrow Advertising employs about 2,500 people across the United States and 10 other countries. Spinners had to qualify locally to be among the 120 to compete this weekend.